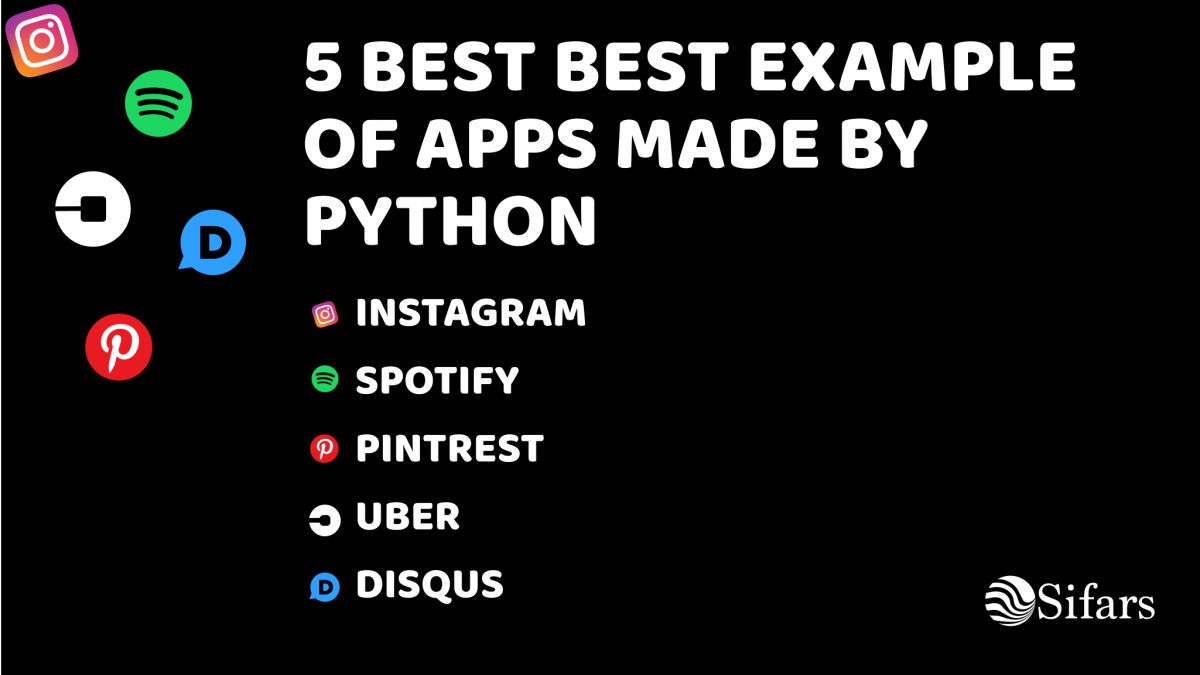 5 Best examples of Apps made with Python
Uncategorized, Web application

Websites and Web Apps are the new trending sensation in the web universe. Brands have gradually shifted to apps with smooth functioning and clean design. Amongst the many programming languages available to choose from, Python has been able to prove its importance with its rich functionality. Python with its plethora of libraries helps in fast work processes that accompany designs that are unique and mesmerizing. Further, it is an open-source language and is backed by many developers. Many web apps are ruling the internet that is made from Python and Django frameworks. The top 5 examples of Apps made with python are as under.

5 Best examples of Apps made with Python

Instagram is an app that was primarily made to instantly click and share pictures. It made use of a camera and filters that actually helped take quality pictures as well as a high-definition quality camera. Instagram now has about 450 million active users per day that are constantly engaged in the app features. Further python displayed its scalability with its new reels feature. The reels features came as a more accessible feature thus connecting millions of users. It further opened the doors of creativity and people used it as a marketing strategy for promoting their brands. Python offers a clean design, rich functionality, user-friendly interface that makes the apps made on it so popular.

Social media networks brought a revolution as Facebook and Twitter entered the market. Soon Pinterest captured the attention as one of the most preferred platforms for images and ideas. People got a platform for bookmarking images and thereafter sharing them. Pinterest leverages the best of capabilities of python and Django and exhibits the most smooth functioning web app with a large amount of content at disposal. It also has more than 300 million active users that rely on the app for sharing and bookmarking their images.

Well, we all have questions and we look for the solutions until we get the perfect satisfying answers. Some problems are subjective and hence involve discussions and opinions. Disqus applied the same formula and was able to capture a huge audience. Disqus as we all know is a commenting app that invites users that effectively engages the audience. It is a beautiful app that fuels the discussion with a clean interface and has approx 75 million monthly active users. It has rich features such as multiple sign-in options and cross-site notifications that explicitly exhibit the properties of Django.

Music connects the soul and the world. Spotify grabbed the opportunity to use Python as a programming language to stream music all over the world. With zero loading time and advanced data analytics in different languages, Spotify grabbed a large market share. Today it is the world’s largest streaming service with approx 300 million active users. Spotify runs smoothly and has a huge database that helps people to discover music globally.

A pioneer Ride-hailing and food delivery partner that also offers many other services like bike and bicycle sharing. It operates globally and offers smooth services from booking to collections of fares as per its rules. Uber operates in around 10000 cities globally and works efficiently which is possible only with the help of Python. Python with its numerous libraries and scalability has helped Uber to handle all the calculations and cover almost all the major cities globally. Python can easily manage the large database of data and that too with very little code work involved. Moreover, it offers reliability and security that made UBER the most widely used app with more than 75 million active uber riders globally.

The portfolio speaks for itself

Well, such a strong portfolio doesn’t require any further words to describe how powerful Python is. Python in its initial launch days was only used by startups as it was quite simple and cheap. Gradually as it displayed some uncomparable features, Python became a hot trend and many companies made the best use of it to get their presence shadowed across the world. Python surely is known as the king of all the programming languages and is currently the most preferred career choice among developers. Have any idea? Discuss it with the leading Python Development company and get your brand to rule the search engines space.