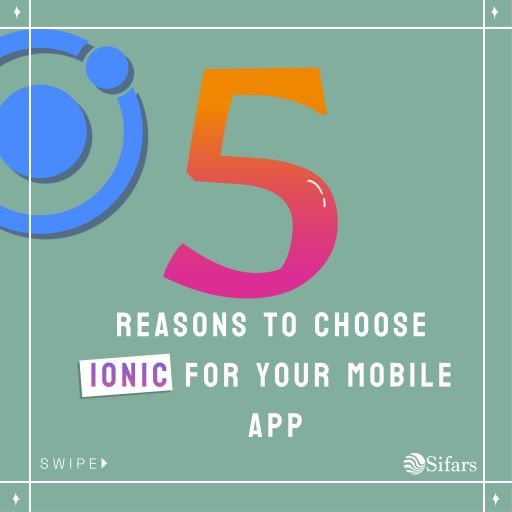 5 Reasons to Choose IONIC for your Mobile App
Web application

Why Ionic? 5 good reasons to use ionic in 2022. -Choosing is difficult. Choosing a gift for someone is more difficult. So what to do when you have to make a choice? You often go with the option that tops the fashion. Looks do matter.

Today’s market is already flooded with apps as online shopping is the new trend. Even your smartphone might be having numerous apps that are visually attractive and have made you a shopping addict as you lay on the cozy couch.

This on-the-go fashion of buying, ordering food, bookings, and payments have brought a revolution in the mobile phone app industry.

You have a brand or a coaching institute or a restaurant owner, You might not have a physical address, but you ought to have a mobile app that helps you reach a global audience.

Now that you choose to have an app, what framework should you use for your app?

A little time before, only native apps had an edge. But today we all have witnessed the need and fashion of hybrid apps that are made with IONIC. Ionic has changed the paradigm of app development.

Ionic framework gels up quite well with the programming languages like CSS, HTML5, and Javascript. The beautiful combination works out to bring on apps that are not only visually appealing but also serve as hosts of the best user interface. Ionic is known for its multi-purpose application in various apps that gives it superiority over others.

Still, finding out why Ionic? Here are the top 5 reasons that justify enough to choose Ionic for building your next mobile app.

Ionic as a framework is one of the most stable frameworks that have a strong base. It is an open-source framework that won’t charge you hefty sums while promising reliability and speed.

It simulates a native app and offers a mesmerizing visual experience. The apps give an uncompromising feel to apps that make them subtle yet classy.

Angular is a worthy framework for making mobile and web apps that speak for themselves. Ionic makes use of Angular js for providing the application structure. It leverages the syntax extending the HTML to include the components of data binding. Similarly, the Javascript-based Angular js framework ensures High performance with reliability.

The Canvas of the user interface

The ionic platform works out as a canvas that depicts the creativity of the developer. You can adorn your app with different buttons, menus, color schemes, etc for the end result to be visually appealing. Ionic stands stronger as it has a strong foundation of CSS and javascript features included in Angular. Apps made with ionic exhibit some best examples of creativity with great UI.

Apps are trending in as they support your choices. You often use a Camera, Battery and Geolocation, and many other features that are a part of your optimal working app.

All the above features are a part of the Cordova PLugins that facilitate and adorn your app bringing in more promising and efficient results. Cordova plugins attach the piece of javascript coding with your apps that allows you to do multiple things.

Ionic helps you with mobile app testing across platforms. Testing is made easier on a desktop browser and works well for both iOS and Android apps using Cordova commands. At the same time, it helps in remote debugging to avoid any issues. The apps also can be tested directly to know the real picture as to how the app would perform.

Still looking for some reasons to try out working with this framework. Don’t stress over it. We already said, making choice is difficult. But if you have the best option in front that supports you with the best of customization while being backed with a hybrid of three strong languages. You must not overthink. The above-mentioned are the 5 good reasons to use ionic in 2022. Bring on your idea with our Ionic developers to make it a web reality. Sifars has a strong team that can make you experience the best ever mobile app development experience. Let us connect.